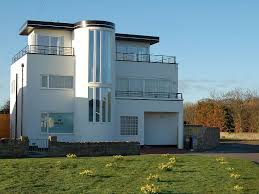 Just as the swinging sixties was closure for WWII, so Art Deco was for WWI. There are relatively few pure Art Deco houses and the movement’s impact on our domestic architecture was more as an influence than a rigid template. Indeed, the two main influences during this period are seemingly at odds: Art Deco, determined to machine a new future and the Arts and Crafts movement, dedicated to rediscovering the manual honesty of the past…

This period saw the construction of 3m+ homes, serving all strata of society: imposing detached properties; semis of varying sizes; terraces and quick-build, Georgian revival inspired social housing. Art Deco contributed an appreciation of the curved and angular. Pebbledash and Roughcast were still popular though by the 1930s they often featured in panels rather than as a cover-all render. The influence of Arts & Crafts is seen in those typical touches – half timbering, elaborate brick chimneystacks and herringbone brickwork.

By 1936, architects were importing ideas from the Bauhaus and the International Modern style along with the use of reinforced concrete, smooth render and other ‘modern’ materials. Reinforced concrete (actually invented in 1853) presents its own challenges for cleaning, preservation and restoration.

So, much happened in 1930s’s house building: specific bricks with associated pointing were featured; bricks were mass-produced leading to a drop in quality and finish (some were consequently pattern-stamped); cavity walls – two independent leaves of brickwork tied together – were introduced and concrete started its journey as a primary building material. These developments all have practical implications for restoration and cleaning, as does the move from lime to cement mortar and the re-use of earlier bricks that need to be identified and treated accordingly. In short, 1930s’ houses need as much specialist care as those a century older