I was there… Battersea Power Station 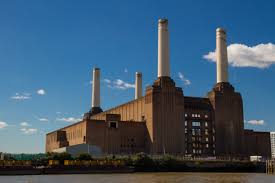 Back in the late sixties when I was only just in long trousers, we lived opposite a rather fierce single lady who taught at my school. She had a son who was a good friend, an Old English sheepdog whose breath suggested it was keeping something dead in its mouth and a gentleman caller (I think that’s what my parents called him) who was a senior engineer at the still belching Battersea Power Station…

One Sunday he took me to look round the Station. As we approached, the extraordinary scale of its deceptively simple outline became increasingly apparent. Its exterior architect, Sir Giles Gilbert Scott, was a master of the brick-cathedral style, further demonstrated in his Bankside Power Station (now the Tate Modern), though less discernible in Waterloo Bridge, Liverpool’s Anglican Cathedral and the iconic red telephone box which he also designed. Like the concrete brutalism of 1930’s European monumental architecture, so loved by the fascists, Battersea Power Station is awe-inspiring but brick, even on this scale, retains a warmth that invites rather than overwhelms and remains the perfect, contrasting base for those soaring, concrete chimneys.

And then we went inside…I didn’t then know that there was such a thing as Art Deco, never mind what it represented; I just knew that J. Theo Halliday’s interior looked extraordinary. It was an interior somewhat at odds with what was essentially a building constructed for function rather than form. It was all gloriously unnecessary. Of course, I’m remembering A Station, built before the war. B Station followed after the war when money was far tighter and the polished brass nobs and dials, the Italian marble, the Fletton brickwork and purely decorative detailing were no longer affordable.

For me, what happened to Battersea Power Station between its decommissioning in 1975 (A Station) and 1983 (B Station) and the start of its current regeneration constitutes one of the greatest acts of architectural vandalism we have yet seen. Certainly up there with the post-war demolition of so many country houses. How could one of the world’s largest brick buildings have ended up being listed on both English Heritage’s At Risk Register and, in 2004, on the World Monuments Watch? And what does it lack that has denied it a Grade I listing – it’s only Grade II*?

Still, at least I saw it in its prime and while those memories are blurred, they are brought into sharper focus every time I see contemporary photos. And I’m sure I’m among many now anticipating its reincarnation.