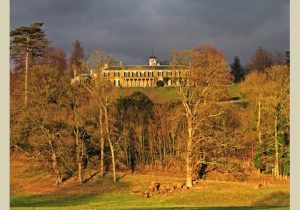 During the 1980s, we were regulars at the National Trust property, Polesden Lacey working our way through three separate contracts…

One of the bonuses was the opportunity to build a friendship with Vince, the Head Gardener and his wife who worked at the egg farm at the bottom of the Polesden Lacey estate. They had a cottage on the estate where I enjoyed a cup of tea on many occasions.

On the morning of October 16th, 1987 I was on the way to Polesden Lacey but found my way blocked by fallen trees on the main drive – The Great Storm had struck during the night. It was therefore a few days before we could get back on site – and I could catch up with Vince. When we did, he was still overcome with the devastation the storm had caused as he had planted many of the trees he now had to chop up. I could empathise as it struck me as similar to when we are faced with ancient stonework that is now beyond restoration.

But the final verse must go to Vince’s wife. When we working there, I would pop in to see her at work and buy a dozen eggs every Friday. Nothing remarkable in that except she would always ask me if I would like double-yolkers; I of course always said ‘yes’ and that’s what I always got. She never would tell me how she could tell!