A ceramic masonry building material of glazed terracotta used as a decorative skin on buildings. Sometimes referred to as ‘architectural ceramics’.

Terracotta, literally ‘cooked earth’, has been in use, with little change, for millennia to create utilitarian domestic objects; simple statues and bricks, blocks and tiles for building. Yet it wasn’t until 1859 that England saw the introduction of glazed terracotta when the Burmantofts Pottery in Leeds was opened to manufacture glazed industrial pipework from the fire clay that had just been discovered in a local coal mine. The firm expanded, diversified and experimented with glazing. Twenty years later it launched glazed terracotta tiling for internal and external cladding – architectural faience had arrived…

It was immediately championed by architects and embraced by the public. It was durable, impervious and exceptionally resistant to the blackening effect of city smoke. Cleaning was consequently simple – when new, a squirt of water did the job. It was also easier to handle than stone, set quickly and cost less. But it wasn’t just practical. Faience could be cast with intricate details of form or texture and, of course, offer a wide choice of colour through the glazing and the distinctive palette of bottle greens, rich reds and burnt ochres that, in many ways, defines the late-Victorian architectural aesthetic.

Architect Alfred Waterhouse used Burmantofts faience for both the Yorkshire College (1883) in Leeds and the National Liberal Club (1884) in London. The Savoy Hotel was built in 1889 with a faience exterior – close to our hearts as we have recently undertaken its restoration. 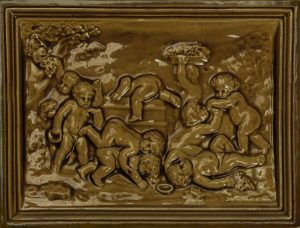 By then, Burmantofts had ceased production but other potteries took over. Faience crossed the Atlantic to equal acclaim. Both New York’s Woolworth Building (1913) and Chicago’s Wrigley Building (1924) are clad in gleaming white faience. But this was its last hurrah.

Despite proven versatility of both construction and design, by WWII it had fallen out of favour and the architects of the post-modernist, post-war landscape had little, if any, use for it. Ceramic veneer tiles, developed in the 1930s, continue to be used in kitchens and bathrooms.

So faience proved to be a glorious, but short-lived, fashion and in England there are relatively few grand buildings showing off its unique splendour – and even fewer new buildings (though there are some including Grayson Perry’s A House for Essex) featuring this remarkable material. Even if this represents the start of a resurgence, what’s left needs to be cherished and conserved and we are delighted to be playing our part.