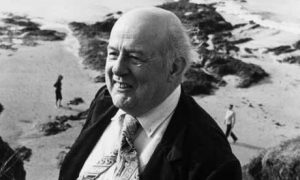 Come on! Come on! This hillock hides the spire,

Now that one and now none. As winds about

The burnished path through lady’s-finger, thyme,

And bright varieties of saxifrage,

So grows the tinny tenor faint or loud

All all things draw toward St. Enodoc.

Come on! Come on! and it is five to three.

Still, Come on! come on!

More than a moment on a ragwort bunch,

A mile of sunny, empty sand away,

A mile of shallow pools and lugworm casts.

The two things I share with Sir John Betjeman are an appreciation of Victorian architecture and a deep and longstanding love of Cornwall. And, for me, no spot in Cornwall can match a stretch of sand dunes to the sast of Daymer Bay and Brea Hill, to the west of a village Trebetherick in which you will find my favourite building – St Enodoc’s Church.

This ancient church is said to mark the location of a cave in which Enodoc, the hermit,  lived. It is perhaps fitting that this simple, tranquil chapel is dedicated to one of those Saints whose true identity is uncertain. Anonymity rather suits it. Its appeal lies in its trinity of location, quirky history and a total lack of any architectural flashiness.

The picture above explains everything about the setting – but its history? The earliest part of the church dates to the.12th century; it was extended in both the 13th and 15th centuries but by the 18th century it had been all but swallowed by drifting sand. It remained, however, consecrated and to maintain the tithe it owed to the Church, at least one service had to be held every year. The solution: the vicar and his congregation were lowered into the church – known by then as Sinking Neddy to the locals – through a hole in the roof. Only in England! In the middle of the 18th century, the sand entombing St Enodoc’s was dug away and the surrounding dunes stabilised producing its sunken, somehow reassuring, setting that it enjoys to this day. The church was then cleaned and restored (1863 – 1864) under the somewhat heavy-handed supervision of J. P. St Aubyn, a Victorian Gothic Revival architect whose slavish adherence to his chosen style led to many an over-worked restoration. St Enodoc’s got away relatively lightly, but that did not stop Betjeman heaping opprobrium on the man.

And, of course, St Enodoc’s today is very much thought of as Betjeman’s church. He visited many times, it inspired his poetry (see above) and he is buried there in a grave as unassuming as the church itself.

The church is plainly built in stone rubble topped by slate roofs and is laid out to a modified and truncated plan: nave, chancel, short south aisle, a south porch and a north transept leading to the two-stage tower (unusually to the north of the church) that supports a low broach spire in which hangs just one bell. Enough to summon people though.

Unfortunately, the interior is far more Mr St Aubyn than Saint Enodoc but if you look, original features can be found – you can’t miss the massive 12th century font. But if the architecture is unremarkable to the historian, to the visitor the accidental blend of the Norman and the Victorian is the very thing that makes it special.

Sometimes, you need nothing more than perfect sim[plicity.