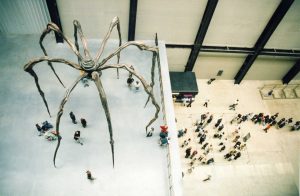 Tate Modern started life as Bankside Power Station. Built in two stage between 1947 and 1963, it was the last major ‘cathedral of power’ designed by the great Sir Giles Gilbert Scott who died just three years before its completion. Scott was generally opposed to such massive, industrial structures going up in city centres but relented and accepted the commission, in part, perhaps, because it gave him an opportunity to use all that he had learned from his defining work on Battersea Power Station.

It seems strange that so striking, so elegantly monumental a building could ever be under threat from a developer’s wrecking ball, but for the 13 years after its closure in 1981, it was a heartbeat away from destruction. It even had to suffer the indignity of being rejected when an application was made for it to be listed. But, in April 1994, the Tate Gallery confirmed that it was to be the new home of its post-1900 British and international modern and contemporary art. Five years and £134m later, Tate Modern opened its doors – and I was one of the first to visit.

The first impression of any art gallery is inevitably the architecture of the building that houses the art and that must surely influence how we then perceive the art itself. From the outside, Tate Modern doesn’t disappoint – you can’t argue with the impact of 4.2 million well-laid London Stock bricks. Then you enter one of the great spaces in London Architecture – The Turbine Hall. It’s simply a great place to be in – bold, light and dramatically impressive. Finally, you’re confronted by the always imposing temporary installation – art on the grandest of scales. I doubt anyone lucky enough to have seen the first installation, Louise Bourgeois’s giant spider (Maman) will ever forget it.

I’ve been a regular visitor ever since – actually, I should say ‘we’ as this is where I took my partner, Holly, on our first date. Thank you, Tate Modern.

And one last thing, not content with serving up Picasso, Warhol, Hockney etc. along with many other, less well-known and more challenging, artists, the restaurant also serves some of the best chips in the capital. Thick and crispy enough for a game of Jenga.