I’m sure I’m not the only kid to have fallen in love with St Paul’s after hearing for myself the unintended bit of magic that is the whispering gallery – undoubtedly the highlight of any school trip to London’s most iconic building. And if I hadn’t gone on to a career working with stone, that’s where it would probably have ended…

There has been a church or cathedral on the footprint occupied by St Paul’s atop Ludgate Hill since 604. The building it replaced – called Old St Paul’s – was begun in 1077 after the previous church had itself succumbed to fire. Old St Paul’s survived for 589 years during which it underwent alternating periods of neglect and expansive reworking until it was gutted by the Great Fire in 1666. The decision was taken to demolish what was left and Wren, who had already replaced around 50 Parish Churches in the surrounding area, was given the brief to build a new cathedral: “handsome and noble to all the ends of it and to the reputation of the City and the nation.”– along with a budget of no less than £161 million in today’s money, raised by a tax on coal. Wren’s challenge was to create a cathedral that would once again impress and dominate. To achieve this, he instinctively turned to a spired structure but, under the influence of Michelangelo’s St Peter’s among others, changed his mind and his design to the famous dome.

And for anyone working with stone, domes hold a special place – no matter how well you may understand the engineering, part of you can never quite believe it stays up! And the engineering for Wren’s dome is rather special. It has a double shell creating, in fact, two domes between which there is a load-bearing brick cone – and a lot more clever stuff besides. The result is the external dome rises to 365’ – London’s tallest building until Battersea Power Station beat it n 1939 by just 5’.

Wren, of course, was not just a superlative engineer and a great builder, he also understood the aesthetics of both architectural form and the materials used to express it. In another masterstroke, he chose to build St Paul’s in Portland Stone. Admittedly, until the extensive programme of cleaning and restoration was completed in 2005, St Paul’s bore the disfiguring scars of London’s unforgiving pollution. But today, the glory of this much-loved white-grey limestone, quarried from that tiny, eponymous island off the coast of Dorset and exquisitely worked by craftsmen like Grinling Gibbons and Caius Gabriel Cibber, is shining once again. If you haven’t visited since, I do urge you to go. It’s one icon that really does live up to its reputation. 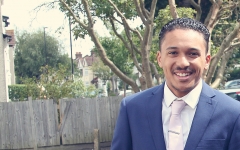