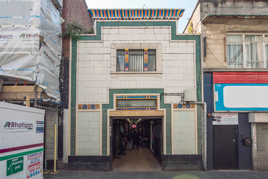 The entrance to South London's most famous arcade 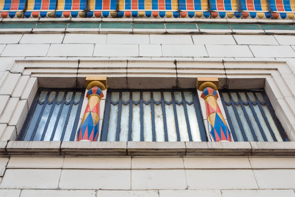 For a relatively small residential community, Brixton, in South-East London, punches way above its weight and for the last century has rarely been out of the news – not always for the right reasons but these days the stories are more about regeneration and gentrification than anything negative. And throughout this time, The Reliance Arcade has been at its heart. The narrow covered market was built between 1923-5 by Andrews and Peascod. Its Egyptian-style faience façade, fronting Electric Lane, is an early – and rare - example of Egyptian style architecture in London influenced by the discovery of Tutankhamen's tomb in 1922.
Listed in 2010 (Grade II), four years later English Heritage put the Reliance Arcade on its At Risk Register. Describing its façade as follows:…in buff faience with red, green, yellow and blue Art Deco Egyptian-style detailing in the small columns to the upper-floor window and a coved, fluted cornice and above the ground floor door and windows.

To clean and restore or replace the faience tiling at the entrance that has been stained or damaged by water, vegetation and pollution.

Working as a specialists sub-contractor, the faience tiling was cleaned using the DOFF system. All the defective faience was carefully cut out and replaced with new, matching material using our specialist repair system.